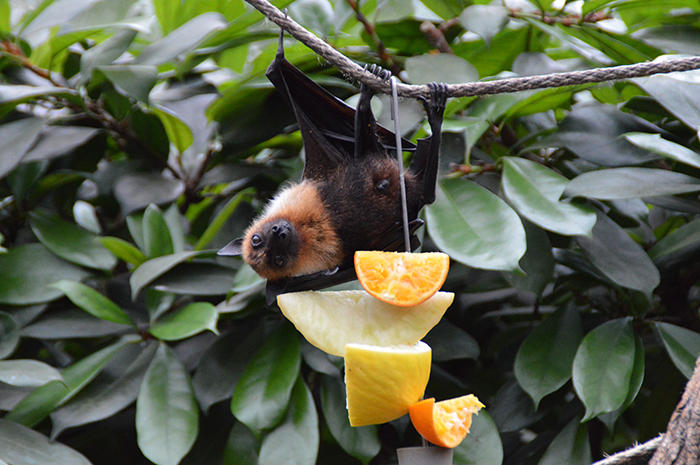 “What do bats eat and drink” – you can find a variety of answers to this question. Since there are 1400 species of bats worldwide, it is not surprising that they do not all have the same diet; after all, their habitats can vary greatly. Although about 70 percent of bats are insectivorous, some species feed on fruit, nectar, animal blood, and even fish!

Do bats drink? Yes! Just like other mammals, a large percentage of a bat’s body is water, and they need to take in water to survive.

Bats around the world – feeding habits

Hoary Bats – Found in North and South America – Hoary bats are insectivorous and mainly eat moths, but this varies depending on where the bats live. Their diet may include dragonflies, grasshoppers, bees, beetles, and flies.

Vampire Bats – Found in Mexico, Central and South America – Vampire bats feed on blood from cattle. Blood-sucking bats may sound gruesome, but the bats only drink a small amount – at the most, about one tablespoon of blood. As bats are nocturnal, the cows or horses will often be asleep and unaware that they have provided a meal for the vampire bat.

Spectral Bat – Found in Mexico, Central, and South America. They are the largest of all carnivorous bats – their wingspan can be longer than 3 feet! They eat rodents, birds, and even other bats!

What Do Bats in the US eat?

There are 45 known bat species in the US. Forty-two of these species eat insects. Bats are nocturnal and primarily feed at night. Although bats can see at night, they rely on a clever technique called echolocation to find their prey. They send high-frequency sounds that bounce off objects and return to the bat’s ears, telling them the distance between them and the insect or surface. Humans can’t hear these sounds as bats emit sounds with a frequency of between 20-100 kilohertz. We can only hear up to approximately 20 kilohertz. Bats fly very high at night using air currents, but their flight is not consistently straight; they dip and rise with the thermals. Once a bat has located its prey using echolocation, it has to move fast, as insects move quickly and unpredictably. That is why we often see bats at night flying from one direction to another at high speed.

Three most common bats in the US: (insectivorous)

Big Brown Bat – The insects they consume vary depending on their location. They feed on beetles, bugs, flies, moths, and cockroaches. Many big brown bats feed mainly on beetles.

Fish-eating Myotis  – These bats are found in Islands off the Gulf of California and mainly eat fish and crustaceans. Although researchers have not discovered how these bats locate their prey, they know the fish-eating myotis’ catch their food using their large feet and long claws.

Greater Long-nosed Bat – Found in Mexico, Texas, and Arizona. These bats feed off nectar; as their name suggests, they have long noses and tongues, allowing them to reach deep inside flowers to get the nectar.

How do bats drink?

Bats need to replenish their water supplies to survive. Their food can provide a certain amount of water, but bats also frequently go to water sources to drink. They use echolocation to find bodies of water. Bats are not able to land on water. Therefore, they do not stop to drink but swoop down to the water and drink in flight. Some bats will fly so low that their body is touching the water and will then land somewhere nearby and drink water off of their body. Bats like the fish-eating myotis can survive on salt water if fresh water is unavailable. Bats feeding their young need to drink much more to replenish what they are losing, and will drink several times a night.

Should I feed bats?

The more we learn about the feeding habits of bats, the more we can be grateful that bats exist. Bats save the agriculture industry billions of dollars every year on pest control. They also pollinate plants; without bats, many of the foods we enjoy now would not be available. In addition, fruit-eating bats spread seeds; when the bats eat fruit, the seeds are not digested but pass through the bat and disperse wherever the bats defecate. It would be impossible for humans to do this manually; therefore, bats play a vital role in the growth of many plants, fruits, and rainforests.

Please be aware that you should avoid contact with bats due to the risks of contracting a disease. Do not attempt to feed bats in your home or outdoors. Bats should not be kept as pets, and you should not encourage them to roost inside a residential or commercial property. Bats can cause extensive damage to buildings. If you need advice regarding a possible bat infestation, contact us today.

If you would like to learn more about bats, please read some of our other articles.

Bat In My House

Your Cat Caught A Bat, What Should You Do?

What Should I Do?