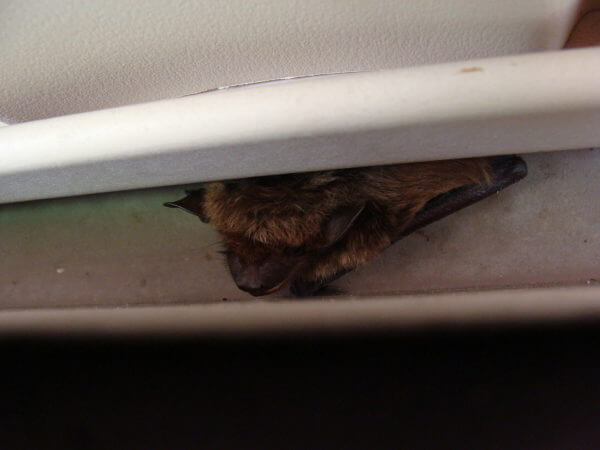 Over the last few months, we’ve spotlighted the Mexican free-tailed bat and the big brown bat. Next up in our series of highlights on different bat species is the little brown bat (scientific name Myotis lucifugus).

In this piece, we’ll talk all about the little brown bat, including where it lives and what makes it unique!

Whether you call it by its more formal name, little brown myotis, or stick with little brown bat, this is a bat species that you’ll find all over the forested areas of the United States, from Alaska and Newfoundland down through Southern California and northern New Mexico. They’re partial to forested areas that lie next to a body of fresh water.

You won’t just find them in forested areas, however. This versatile species has homes in mountainous areas too. Perhaps most importantly, little brown bats are very comfortable with humans, which is why you’re likely to find them in all kinds of man-made structures (and why we see them so much in our line of work). They especially like attics.

When they are living in nature, little brown bats roost inside the cavities and crevices of trees or under rocks. They use roosts to stay warm and as a way to avoid predation, and they generally need three different kinds of roosts: day roosts, night roosts, and hibernation roosts.

What Makes Them Unique

Perhaps one of the most interesting things about little brown bats is just how little they are! They weigh between 0.18 and 0.49 ounces, with an average total length of just 3.43 inches.

They’re also known for their glossy fur and its brown or reddish-brown shade.

As for their diet, Little Brown Bats enthusiastically chow down on aquatic insects like mosquitoes, midges, mayflies, and caddisflies, as well as land insects like moths and beetles. What’s most exciting is the astonishing rate at which they eat: 1,200 insects in an hour!

You can expect a little brown bat to live just six to seven years on average, with the male living longer than the female. It’s possible for these bats to live well past ten years. This lifespan is in stark contrast to the big brown bat, which can live eighteen to twenty years!

If you encounter a little brown bat, big brown bat, or any other type of bat in your office or at home, don’t hurt it! Give us a call, and we can use our exclusion techniques to remove it and relocate it somewhere safe, completely humanely. It’s a win-win when you can have the bats out, and the bats can keep living somewhere else.

Speak With One of Our Experts Today
0
print
Share