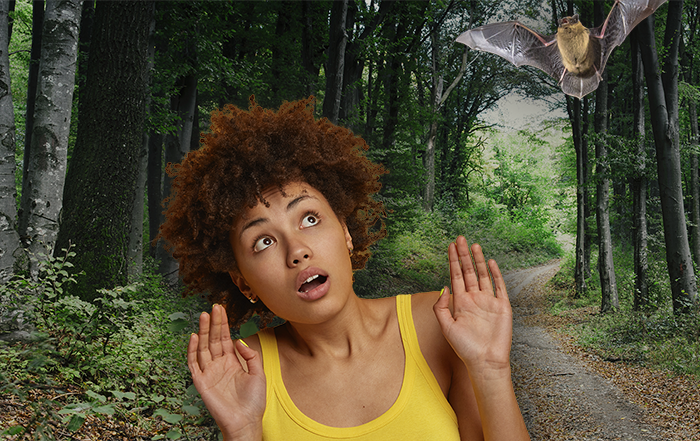 Frightening stories about bats abound in ancient folklore of different countries across the globe. Some think bats go out at night to attack people or suck their blood. Others say bats deliberately get caught in women’s hair and believe the bat will only leave the woman’s head if there is thunder and lightning. Whether you have heard things like this or seen media reports about “bat attacks,” the thought of encountering bats can be terrifying, but is this fear justified? Will bats attack you?

In actual fact, a bat is very unlikely to attack a human unless provoked. They do not deliberately try to attack or hunt humans. Quite the opposite, a healthy bat will usually fly away from you. If you see a bat outside at night, it is not trying to find a human to attack. Bats flying about at night are most likely hunting insects, which they feast on at night – in fact, a single bat can eat over 1000 mosquitos in just one hour!

Why Do Bats Swoop At People?

It may appear that a bat is flying towards your head due to the type of swooping, sudden movements they make. This is because bats find it very difficult to take flight from the ground and need a high place from which to take flight. For this reason, they are often seen swooping down from a height, almost as if falling – it’s not because they are deliberately aiming to attack you. And actually, their quick movements and sudden direction changes are likely because they use echolocation for hunting an insect – imagine what you would look like if you were chasing a mosquito!

When Do Bats Bite People?

Like any other species, if bats feel threatened, they will defend themselves and may bite. Bat bites occur most frequently when a person attempts contact with a bat, such as trying to catch a bat. If a bat feels trapped, it may become stressed and bite, again as a means of defense. Accidental contact with bats may also lead to a bat biting. For example, if you unintentionally disturb a bat roost within your property, the bats will take flight to find a place of protection and may bite if you are in their way.

We’ve considered the behavior of healthy animals, but will bats attack you if they are sick? Rabid bats may behave abnormally – they could lose their ability to fly, be seen in the daytime, be easily approached, and bite another animal or a human without provocation. Therefore if you or someone else is bitten by a bat, it is vital to seek immediate medical attention to get post-exposure rabies shots and advice due to this risk of rabies.

Will vampire bats attack you?

The frightening stories about bats likely originate with the Vampire Bat, a species found in tropical areas of Mexico, Central, and South America. Vampire Bats are the only mammals that feed on blood alone. It sounds pretty horrific, and gruesome images may come to mind of bats attacking humans by the neck to suck their blood, but actually, such horror-movie scenes are pretty far from the case. Vampire bats do not usually feed on humans. Instead, they feed on livestock and sometimes other wild mammals or birds.

The bite of a vampire bat is not incredibly painful. It has been compared to that of a mosquito and may not even be noticed by sleeping prey. Studies show that these bats use thermoreceptors on their noses to detect in their prey an area of blood flow close to the skin, so with just one bite, they can break the skin and get a flow of blood to feed on. According to Barbara French, a bat expert at Bat Conservation International, on the rare occasion these bats may feed on a human, they are unlikely to bite someone’s neck but are “more likely to go for a person’s big toe,” as they can detect a good blood supply there.

So, in answer to our question – will bats attack you? – we know that most healthy bats would not randomly attack, but should we be worried about attacks from Vampire Bats? According to the United States Geological Survey, Vampire Bats do not exist in most of the U.S, and “only a single specimen has been recorded for the United States in extreme southwest Texas”. In addition, occasions of vampire bats using humans to feed have been rare, usually due to their natural habitat or usual food supply being disrupted, due to deforestation or livestock being relocated.

Bat expert Barbara French explained further: “The people who are likely to be bitten by vampire bats are those that sleep outdoors or are sleeping in huts that don’t have any windows on them.”

How to avoid being bitten by a bat?

When outside, avoid contact with bats. If you are concerned about your proximity to a bat, slowly and quietly move away. If you are sleeping outside, we recommend following the CDC’s advice to use tents, screens, or mosquito netting to protect the bats effectively.

If a bat is inside your home and you need to capture it, make sure you are well covered with long-sleeved clothing and thick gloves. Shouting, loud noises, and making significant movements will only confuse and scare the animal making it more likely to bite, so move calmly and quietly. Also, make sure children and animals are away from the area. If you don’t feel that you can safely capture the bat yourself, call your Local Bat Removal Company.

Will bats attack you? As stated above, bats are not intent on attacking humans and are generally not aggressive animals. However, contact with bats can still pose a severe health risk. This is not due to the severity of a bat bite – although bat bites can be painful, the pain is not usually severe and may be quite minimal. Instead, the danger primarily comes from the risk of exposure to rabies. Although only a small percentage of all bats carry the disease, the risk should not be ignored. According to the CDC, “Bats are the leading cause of rabies deaths in people in the United States,” so avoiding contact with bats is essential.

If a bat colony decides to take up residence in your home, it brings an additional health risk of histoplasmosis – an infection caused by exposure to fungal spores in bat guano (droppings). Therefore, if you suspect a bat colony is living in your residential or commercial building, you should contact a professional bat removal specialist for professional bat removal.