Why Do Bats Keep Coming in my House? 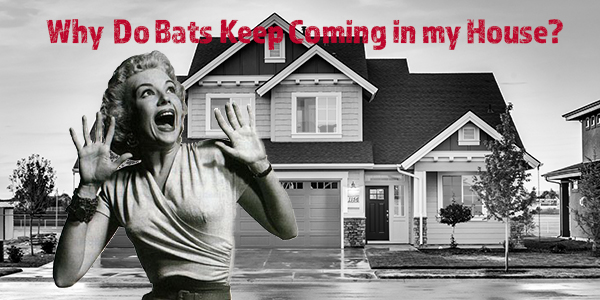 Why Do Bats Keep Coming in my House?

By Michael Koski Posted May 30, 2019 In Uncategorized

A few summers ago, your whole family probably got a good laugh about the bat in the house that dad had to chase and catch while wearing his bathrobe. It was funny after the fact recanting mom running screaming from the room.

The summer after that, dad wasn’t quite as amused about having to capture another one in the middle of the night. And he really wasn’t amused when he had to catch another one a couple days later.

It’s spring now and there’s already been one in the living room. Dad’s not a happy camper and mom is petrified of the growing problem.

The logical question at this point is why do bats keep coming in my house? We have an answer, but you might not like it.

Multiple Bats in my House

One random bat in the house doesn’t always mean anything. Most of the people that call us have had at least two or three instances of bats in the house over the last few years though. Multiple bats in your house is a very strong indication of an infestation.

Most bat colonies found in houses are maternal colonies. Each mother bat gives birth to one pup each year, although sometimes twins are born and some species (though not many) give birth to more than one a year.

That’s the easy answer to why do bats keep coming in my house. To explain in a little more detail, there are a few other factors that drive a bat inside instead of outside:

What’s the Next Step

We know that wasn’t the answer you wanted to find, but it’s not the end of the world. We encourage all of our customers to do a twilight watch and see if bats come flying out of your house. That’s the best (and totally free) way to know for sure. We are also happy to come do an inspection and get you a proposal to handle the problem once and for all.

Don’t sit and wonder why bats keep coming in my house. We can help you fix this issue once and for all. Call our customer service to set up an inspection at 877-264-2287 or click the button below and we’ll call you.