What Blame Can Your Hospital Take for Bats? 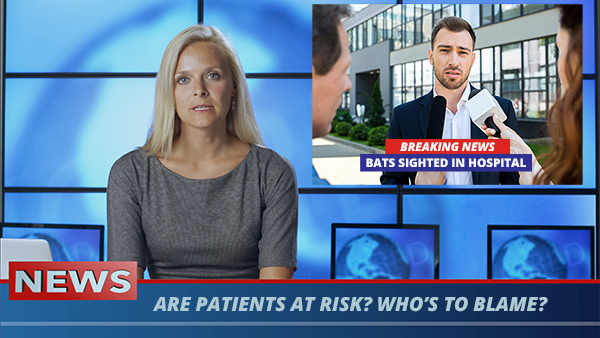 What Blame Can Your Hospital Take for Bats?

Way back in 2012, we were contacted by a hospital that was in a panic. They had a big problem; bats in patient rooms.

This problem wasn’t nearly as bad before it became something employees regularly had to deal with. The employees felt they weren’t being heard by management, and management wasn’t communicating the fact they were taking action. When one employee had enough and called the local health department, things got even worse.

Imagine what the media can do with a story like that. Now imagine what they can do with an amateur video taken by a visitor of bats flying around inside your hospital. (Another true scenario we have helped fix.) It isn’t hard to recognize bats in a hospital are bad news. So how do you keep bad news from going to even worse news?

Negative publicity has caused a myriad of problems for the hospitals we have helped get rid of bat infestations in the past. If your situation has not yet hit the media, keeping it from doing so is paramount. This isn’t the only possible complication you should keep in mind though.

In our free download, “Bats in Hospitals” we use real experiences to show you how other problems hit the media. In addition, we give real case examples of disasters that have happened when the situation wasn’t kept under wraps.

We know your maintenance staff is wonderful and they do a fantastic job on a daily basis. Bats are not your average problem though. They are a unique issue that takes specific knowledge and skills to solve.

Our free download also discusses a few of the many ways we have seen internal maintenance take these situations from bad to worse, completely unintentionally.

It is important to understand a few simple things about bats:

Don’t ignore bats inside your hospital. If you wait, it will be a much larger problem than it could have been.

Notice that about two and a half minutes into this video the girl filming says, “well how did you guys do it last time?” In the description of the video it also specifically mentions this is on the third floor and the windows don’t open.

This is clearly an escalating situation even though all the people in the video appear to be laughing and having fun.

We encourage you to not make the same logical mistakes that other clients have made in the past. Download our free guide “Bats in Hospitals: How a (Seemingly) Logical Response to a Pest Control Problem Can Close Your Health Care Facility… And How to Avoid Making This Mistake at Your Facility” now.