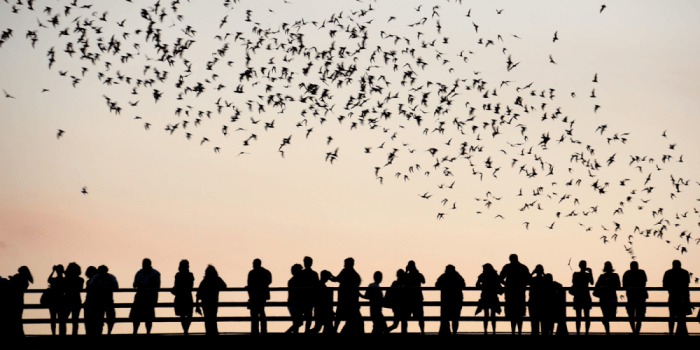 Texas bats are closely monitored by more organizations than bats are anywhere else.

Just to name a few!

The bats of Texas are important for so many reasons. Which is what makes the discovery of white nose syndrome in Texas in 2017 so devastating to the community as a whole.

why are Texas bats so important?

Bats are a benefit to the environment, don’t contaminate our food, and are a free resource for farmers.

It’s estimated that bats across the US save our agricultural community billions of dollars a year. Kind of a no-brainer, right?

fungus that causes white-nose syndrome in bats detected in Texas

Samples collected between January 11th and February 22nd, 2017 by biologists from Bat Conservation International and Texas A&M University’s Department of Wildlife and Fisheries Sciences and Institute of Renewable Natural Resources were analyzed as part of a National Science Foundation funded project led by University of California at Santa Cruz.

White-nose syndrome does not infect humans and is only known to affect hibernating bats. The fungus thrives in cold, humid environments and invades the skin of bats, disrupting their hibernation and depleting their fat stores. Migratory Mexican free-tailed bats, which roost in the millions at popular sites such as Bracken Bat Cave, the Congress Avenue Bridge in Austin, and Old Tunnel State Park, do not hibernate for long periods during the winter, and are not expected to be at high risk for the disease. Although there is no known cure for white-nose syndrome, wildlife disease experts are actively working on several treatments to help improve survival.

How can you help Texas bats with white nose syndrome?

There are two main ways that we know of for you to help Texas bats individually:

Right now, Texas bats need all the help they can get fighting white nose syndrome and keeping their numbers up. Let’s all do our part.

If you want to contribute to Bat Conservation International (which is a great organization we contribute to monthly) you can contact them here: http://www.batcon.org/