White Nose Syndrome has been devastating the bat populations of the Eastern United States for years now; and it may soon be coming to Idaho bats.

Researchers with Idaho Fish and Game are being called upon by the National Fish and Wildlife Service to try and gather some much needed information before the virus is upon them.

We’ve written blogs on White Nose Syndrome in the past, but the virus seems to have slowed on its march across the United States over the past year. There really is no way of knowing when and where White Nose Syndrome will strike next so this new research being gathered by the Idaho Fish and Game department is of paramount importance for Idaho bats.

What Bats Live in Idaho?

Idaho bats are real. We promise. Idaho is actually home to an impressive 13 species of bats.

Female silver-haired bats usually give birth to twins. This is an exception to the rule as most other bat species give birth to only one pup per year. Relatively slow flyers, silver-haired bats forage 20 to 25 feet above the ground over woodland ponds and streams. They emerge earlier in the evening than many other species to consume insects. This species migrates into the Northern U.S. and Canada to raise their pups in the summer and heads south for the winter.

*Fun fact – Silver-haired bats are one of the slowest flying bats in North America.

These large furry bats live in forests and roost in trees, you will be hard pressed to find them in a cave. They are widespread throughout North America and up to the mid-regions of Canada, and are the only species of bat in Hawaii. They live generally solitary lives and are very hard to find. The males and females are geographically separated during the summer months and northern populations migrate south to warmer climates in the winter. Hoary bats will typically give birth to twins during the spring and early summer, deviating from the standard one offspring a year for most bats.

*Fun fact – Hoary bats have been seen foraging up to 8,000 feet above ground. They primarily eat insects but may prey on smaller bats.

These bats are unique from other species in that their tail membrane is lined with a fringe of short hairs. They can be found in the Western United States and Mexico. Fringed bats are a small species, only weighing 5 to 7 grams. Their diet consists of beetles and moths found in tree canopies. Their flight is slow which gives them better maneuverability. Fringed bats are particularly sensitive to temperature and will relocate roost sites to adjust for excessive heat or cold. It is known that fringed bats migrate, but to where and how far is yet to be discovered.

*Fun fact – Newborn pups are placed together in a group separate from adults and will only be joined by the parent to feed. 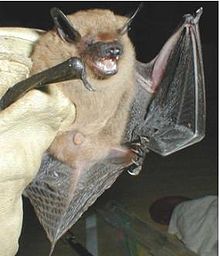 The most common of the Idaho bats species found throughout North America and the southern reaches of Canada, this species is more familiar to Americans than any other bat as roosts are commonly found in homes and buildings. In the warmer months, they can be found roosting in attics, barns, garages, and most other man-made buildings. Only during the coldest weather can they be found hibernating underground in caves and mines. Where the majority of them migrate during the winter is unknown.

Found from Western North America to Southwest Canada and all the way down to Mexico, the Yuma Bat is almost exclusively found inhabiting locations near open water. This is believed to be due to their diet of choice; beetles, flies, termites, and moths. Male Yuma Bats live a mostly solitary lifestyle, only joining females to mate in the fall. Female Yuma Bats can bear young when they are just one year old, and will each raise a single pup in maternal colonies during the summer.

*Fun fact – Yuma bats are very similar in appearance to Little Brown Bats and are often only distinguishable by their echolocation calls.

Known as the smallest North American bat, the western pipistrelle weighs in at less than a penny and has a 7.6 to an 8.6 inch wing span. They fly erratically, much like a butterfly, and they eat small swarming insects. They emerge well before dark, drink and eat, and remain out later in the morning than other bats. Day and night roosts in Southwestern Idaho deserts and canyons include rock crevices, under rocks, in burrows, and sometimes in buildings or mines. Maternity colonies of no more than 12 give birth to twins in June or July. Pups fly at about one month. The species ranges from Southeastern Washington and south to Mexico.

*Fun fact – This is a species of special concern in Idaho.

This western species roosts in trees and rock crevices in mostly forested, mountain areas during the summer. Hibernation sites in the winter include caves and mines. Long-legged bats are quick fliers known to chase prey for relatively long distances and are particularly good at flying in cool temperatures. This unique resistance to cooler temperatures may be what allows them to delay their hibernation period. Their diet consists mostly of moths, but other soft-bodied insects may also be consumed.

*Fun fact – The lifespan of this species may reach up to 21 years!

This small species of bat, weighing only 3 to 5 grams, can be found along the Pacific coastline, reaching east to Idaho and Utah and up to the southern regions of Alaska. Feeding grounds typically include wooded areas, over sources of water, and high above the ground in open areas. Roosts are typically found in loose spaces under bark, hollow trees, rock crevices, and buildings. During summer when females are rearing young, males roost separately and join the females only from September to March.

*Fun fact – Distinguishing this species from the Western Small-footed Bat can be difficult due to their similar coloration.

Similar in appearance to other Myotis species, these bats can be distinguished by their namesake long ears which extend beyond the nose when folded down over their face. The Long-eared Bat is a nimble species that can be seen foraging for insects in and around trees and over water. Females give birth to one pup each summer. This species can be found in the Western United States up to Southwestern Canada and down to Baja California, Mexico. They are more commonly found in forested areas but can also be found in more arid (desert) locations. Roost sites vary greatly and include spaces underneath loose tree bark and inside hollow trees to crevices in cliff faces and inside caves and mines.

*Fun fact – Lifespan for these bats has been recorded at 22 years. 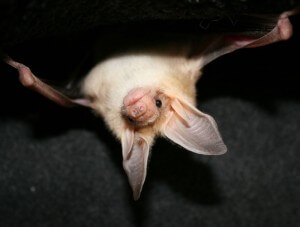 The pallid bat is my personal favorite of the Idaho bats species. It has a yellow colored to a pale creamy brown fur. The ears are large across at the base and broadly rounded along the top. Pallid bats can be found from Southern British Columbia throughout the Western United States to Mexico. They prefer arid or semi-arid shrub climates and grasslands. They roost in rock crevices, mines, hollow cavities in trees, and occupied or vacant buildings.This species usually feeds on ground dwelling insects. The winter habits of this species is poorly documented. Individuals do not appear to migrate or to hibernate for long periods and individuals have been observed flying during cold weather. Yuma bats may roost among pallid bats. Pallid bats are largely inactive in winter, and are believed to hibernate (in Idaho, species is migratory). Females usually give birth to 2 pups from late May-early June. Young fly at 6 weeks and are weaned in 6 to 8 weeks.

*Fun fact – Maternity colonies are usually small, but may include up to 200+ adults, including some adult males.

Much like other bats of the genus Myotis, this bat averages a very small size of 4 to 6 grams. Coloration of the Western Small-footed Bat is a yellow color on its backside and nearly white on its underbelly, though it is difficult to tell apart from the California Bat. Western Small-footed bats roost and hibernate in small colonies of 2 to 6 individuals in rock crevices, stream banks, caves, under loose tree bark, and in buildings. Preferring to feed over sources of water, they can be found dipping down to drink and feeding on insects around ponds, streams, and man-made water sources.

*Fun fact – Uncommon for other bats, this species is known to thoroughly chew its food before swallowing.

The spotted bat weighs about 15 grams and can reach a wingspan of 35 cm. It has three distinctive white spots on its black back. The spotted bats mating season is in autumn and the females produce their offspring, usually one pup, in June or July. Their main diet is grasshoppers and moths. The habitats of the spotted bat are undisturbed roosts on cliffs along canyons, as well as open and dense deciduous and coniferous forests, hay fields, deserts, marshes, and dry shrub grasslands. Use of pesticides such as DDT and other insecticides in the 1960s led to a severe decline in the spotted bat population but current observations have shown that it is more common than formerly believed.

*Fun fact – With ears that can grow up to 4 cm, it is said to have the largest ears of any bat species in North America.

Reaching a weight of 7 to 14 grams, the little brown bat is not that little for a bat species. This is the second most common of the Idaho bats species. They can be found throughout much of the United States and Canada. Hibernation during the winter takes place in caves and mines, but in summer these bats are often found in buildings where maternal colonies number from the hundreds to thousands. Preferring to feed over sources of water, these bats use their wings and tail membrane to scoop insects into their mouth in mid-flight.

*Fun fact – While roosting during the day, mothers hold their babies underneath their wing.

While the Idaho Fish and Game department and the National Fish and Wildlife Service are gearing up to protect Idaho bats in the wilderness, that doesn’t mean you have to live with Idaho bats in your home. If you have a bat infestation you need taken care of, give us a call.

We do bat removal of all Idaho bats species and in all parts of Idaho from Coeur d’Alene to Boise to Twin Falls and everywhere in between.

Got bats? Speak with our bat experts today.
1
print
Share