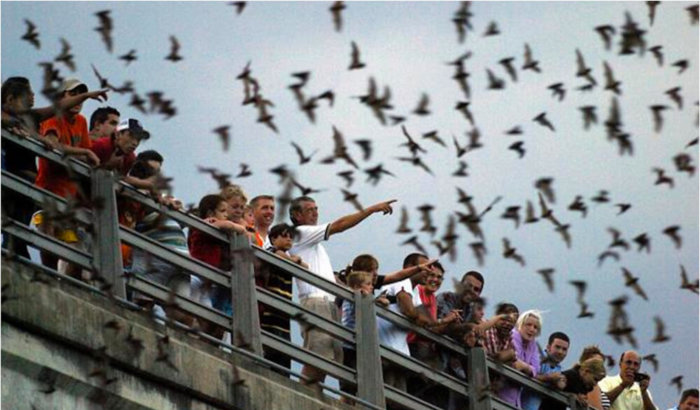 While it was an anticipated problem, Houston bats living in Waugh Bridge have been decimated by Hurricane Harvey much more than was forecasted.

Many saw the dramatic video of rescuers pulling bats trapped by flood waters from under the Waugh Bridge. If you missed it, here it is below.

How Hard Were Houston Bats Hit?

Prior to Hurricane Harvey, there was an estimated 300,000 Mexican free-tail bats living in the Houston Waugh Bridge. Their nightly emergence was a major tourist attraction. This video is from five years ago.

It is now estimated that the Houston bats population living in Waugh Bridge is roughly 1/3 of what it used to be. That’s only 100,000 left.

What’s even more alarming is the trauma the remaining bats seem to have suffered. As you can see in the video above, the bats of Waugh Bridge used to emerge by the thousands before dark. The bats are now being observed waiting until it is completely dark and leaving in a handful of small groups.

Why Should You Care About Bats?!?

The main point any bat haters should walk away with, is that this will disrupt the entire ecosystem of Houston.

Bats are considered a keystone species. Meaning the environment they live in will suffer dire consequences if they disappear from that area. They are classified in the same category as a honey bee.

Consider Helping the Bats of Houston

We are a professional bat removal company. We also appreciate what bats do for the environment. We use humane exclusion techniques, do not handle the bats, and let them simply relocate themselves out of your home or business.

If you have a bat infestation in your home or business, contact Get Bats Out to perform a humane bat removal. Bats are struggling enough these days without the ones that made your house, their home, being killed for it. <3