Fungus Kills 99% of Bats – How Does it Affect You? 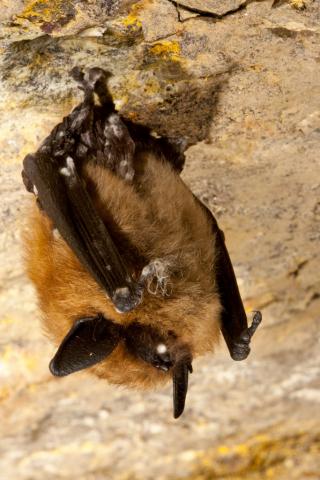 Fungus Kills 99% of Bats – How Does it Affect You?

At Get Bats Out, we are very careful to not kill bats.

While we understand that you want bats out of your home, we do our best to make sure that they continue to live out their lives – just in a different location.

As bat lovers, we are very concerned about the spread of White Nose Syndrome. Recently, Arkansas became the 23rd state to discover the fungus that causes WNS.

What is White Nose Syndrome (WNS)?

WNS is a fungus that is caused by Pseudogymnoascus destructans, previously known as Geomyces destructans. The name “White Nose Syndrome” comes from the white fungus that grows on bats’ skin where there is no fur, such as the nose.

WNS affects bats while they are hibernating and it can cause dehydration and starvation.

It was first discovered in 2006 in eastern New York. Since then, the fungus has killed more than 5.7 million bats. In some caves where the fungus is present, 90-100% of the bats died.

In fact, since 2006, the population of northern long-eared bats has deteriorated by 99%. This fungus is a serious problem.

Why Should We Care About WNS?

Currently, there is no reason to believe that the fungus directly affects humans. This doesn’t mean that we won’t discover any health risks. The biologists and researchers always wear protective clothing whenever they are near potentially infected areas or bats.

The consequences of this outbreak, though, have potential to be even more devastating than they already are.

Each individual bat eats thousands of insects every night. Without these bats, insect populations will explode, leading to issues in our forests, agriculture, and gardens. This would lead to economic and ecological issues.

What Can We Do About WNS?

Humans are the main cause of the spread of White Nose Syndrome. We transfer it around when we go from cave to cave.

Here are a few ways to prevent the spread of White Nose Syndrome:

Looking for more ways to help?

You can Adopt-A-Bat through Bat Conservation International.

WhiteNoseSyndrome.org also has a really helpful page about how you can help.

As you can see, White Nose Syndrome is a serious problem that not only affects millions of bats, it also greatly involves us. Let’s do our part to stop the spread of the virus by spreading awareness of it.