Does Arizona Have Bats? 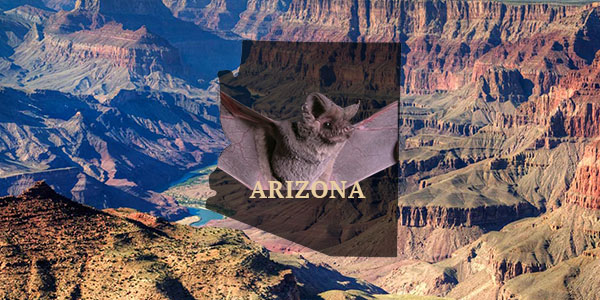 Does Arizona Have Bats?

The people of Arizona are a hardy breed. They have to be to live in the desert surrounded by scorpions, lizards, and snakes. Few people realize just how many bats live in Arizona though. And yes, even Phoenix is filled with them.

Phoenix is actually home to a colony of Mexican free-tail bats that is over 10,000 strong. That’s a very large colony. They live in a flood control tunnel in Arcadia during the summer months to give birth and then most leave in August or September to migrate back to Mexico. Arizona Game and Fish has been monitoring the colony since the 1990’s. There are signs posted educating area residents about the bats since they are located in a popular hiking area.

So, if there is a very large colony of bats living in a densely populated city like Phoenix, imagine how many there are in more rural areas like Happy Jack, Arizona for example.

How Many Bats Live in Arizona?

Arizona is second in the diversity of their bat species only to Texas. There is a whopping 28 species of bats documented in Arizona.

Texas is well known for its extremely large bat colonies. This is due mainly to the species of bats that take up residence there. Mexican free-tails are well known for their large colony sizes. And Arizona is chalk full of them as well.

A couple years ago, there was even a public service announcement about an extreme heatwave driving the bats in people’s homes and businesses where it was cooler. Bats inside an occupied living space is a really bad thing for so many reasons. Rabies, histoplasmosis, and property damage being the big three items.

Bats are great for our ecosystem. We highly encourage you to make sure they stay outside though. Living with a bat infestation inside your home of building is just a recipe for disaster. And bats don’t just go away once they’ve established a roost. Think of them like mice. If you have mice in your house, you address it appropriately as you should. The big difference is that it’s a lot harder to get bats out of your home once they are nice and comfortable there.

Call us today if you need help with bats in your home or business. Whether you live in Phoenix, Happy Jack, or anywhere else in Arizona, we can help!