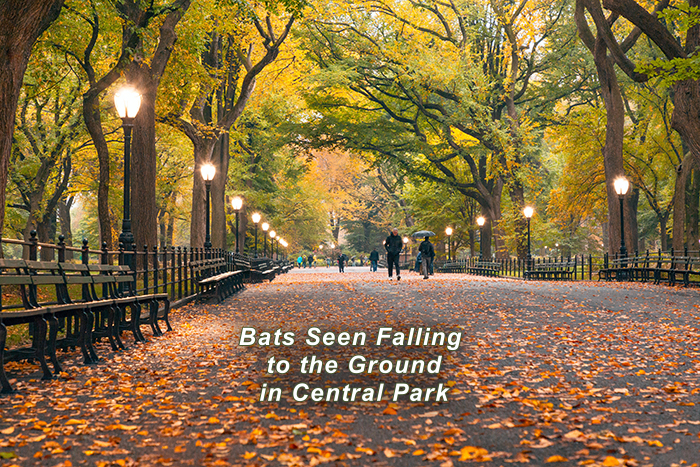 During the last month, bats have been falling to the ground in Central Park. As a result, the Park Department is asking visitors to be on the lookout and alert park rangers if they find a bat on the ground.

Why are bats falling to the ground?

In the fall, bats sometimes go into shock before hibernation due to the sudden change in their surrounding temperature. The NYC parks department advised: “It gets too cold for their muscles, and their activity slows. As temps rise throughout the day, so will their body temperature.”

Why are these bats not in hibernation?

According to the Central Park Conservancy, the most common bats in Central Park are tree-roosting bats such as the Hoary Bat, Eastern Red Bats, and Silver-Haired Bats. All three of these species are migratory, so instead of hibernating where they are, they usually travel South to a warmer climate for the winter. As a result, they may be found in New York during the summer, or during migration, they may pass through New York on their way South.

What should you do if you see a bat on the ground?

If you see a bat on the ground, your instinct may be to try to pick it up or see if it is alive. However, we advise you to follow the Parks Department’s direction and not touch the bat.

A bat could be on the ground for different reasons. Often, a bat on the ground is sick or injured. Bats found on the ground may test positive for rabies. Therefore you should avoid direct contact with the bat if possible. If you touch the bat, it may bite you in self-defense, and you would need to seek urgent medical advice and likely require post-exposure rabies shots. Every year, bats test positive for rabies in all US states except Hawaii. Therefore, regardless of your state, it is vital to be cautious around bats and other wild animals. Follow these guidelines:

If you suspect you may have bats roosting in your residential or commercial property, please contact your local bat removal company today for advice. We are here to help.

What to do if You Find