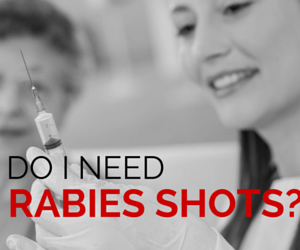 Bats and rabies – who hasn’t heard horror stories about bats and the rabies they carry? Or about the painful series of shots required if one is bitten by a bat? Probably very few of us have escaped the tales of woe from those who have undergone a bat “attack” of some sorts. Or at least a third- or fourth-hand account of a second-cousin-twice-removed who underwent the series of shots.

But just how dangerous are bats, anyway? Although bats make up nearly a quarter of the world’s mammals, fewer than a dozen human deaths have occurred from bat-strain rabies virus in the United States in the last 50 years. However, since the disease is so deadly, the shots so painful, and pets can also be infected, bats and rabies are often feared.

BATS AND RABIES IN REALITY

As the number one carrier of rabies in the United States, all bats probably have rabies, right? Actually, no. It is estimated that less than two percent of bats are infected with rabies. If you see a bat during the daytime, though, consider that bat to be more likely to be infected, since an estimated 15 percent of bats found outside in the daytime are likely to be ill. Why? Because as nocturnal animals, bats are rarely seen outside in the daytime. If a bat is away from his nest, there is a greater likelihood that it is ill and should be avoided.

Ill bats are likely to act abnormally. They may be unable to fly or may be lying on the ground, as if injured. Bats should be left alone; this means keeping all children and pets away from any bat since it is likely ill. Any sick animal is more likely to attack if approached. If possible, you can cover the bat with a can or other enclosure to keep it confined. Call your local animal control facility or public health department to report any bats you find in such a condition. The authorities will need to know about the bat in the event rabies does occur in your area. Pets, of course, should always be kept up-to-date on their rabies vaccinations. In humans, although there is a vaccination available, generally it is recommended that only veterinarians or others with frequent exposure to the virus or to mammals that could be infected receive the vaccination.

Once exposed to rabies, the current post-exposure treatment is a series of shots. These must be given prior to the appearance of any symptoms. If not given before the symptoms occur, the treatment is ineffective.

Bats, just like any other wild animal, can pose a danger. The danger, however, can be mitigated by proper exclusion from your home or building. This, in turn, will allow bats to continue to assist in the control of insects, many of which also carry diseases such as the Nile Virus. Healthy bats, living in proper outdoor conditions, provide a beneficial service to man.

Bat control is a specialized niche in the pest control world. It requires different tools and skill sets than most other pests. Bats also bring the risk of rabies.

All of our employees receive training, rabies shots, and hands on experience with patented devices used to remove bats from infested structures. If you find yourself infested with bats, call in the experts here at Get Bats Out to get the job done right the first time.