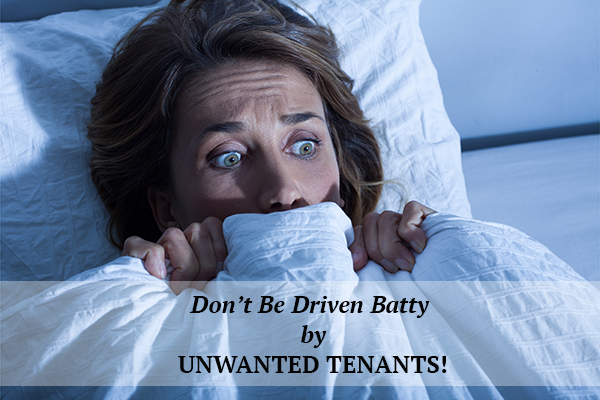 Can you imagine waking up to what you think is a bird flying around in your bedroom, only to discover it’s a bat? And then to be told that your apartment wall is the home to 1000s of Mexican free-tailed bats? Well, there’s at least one woman in Texas that knows it can happen!

Nicole Standley of Houston, Texas, made the unfortunate discovery that bats had taken up residence in her apartment. She made a run for it, after being terrorized by one particularly aggressive bat, and called a bat removal company for assistance. They located the unwanted house guests and addressed the issue with the property managers who were unwilling to accept their offer of help. Not only does this expose the potential for legal and health problems down the road, but it’s also downright irresponsible. So, what can you do if you encounter bats in similar circumstances?

Steps to Take When Faced with a Bat in Your Apartment

Many people are aware of the risk of rabies in bats, but a lesser-known health risk associated with bats is histoplasmosis. Histoplasmosis is one of the dangers of having large colonies living within the structure of a building. It is a disease caused by the fungus histoplasma capsulatum, often found in large amounts of bat guano (or droppings). It’s commonly contracted when guano is disturbed, and the fungal spores become airborne. The fungal spores are then inhaled by unsuspecting hosts – in this case, the tenants of the apartment building. With such a large colony of Mexican free-tailed bats found in this particular apartment complex, one can only imagine how much guano had accumulated!

Many people who breathe in the fungal spores will not get sick, but of those who do, symptoms will appear 3 to 17 days post-exposure and may include:

In most cases, the symptoms of histoplasmosis will go away on their own within a few weeks to a month. However, for some people, particularly those with weakened immune systems, symptoms can persist and may even develop into a more severe infection. It’s all the more reason for property managers to act immediately at the first sign of a bat problem!

The Role of Property Managers

Property managers are obligated to provide a safe and habitable place for tenants to live. Organizing bat removal at an apartment building would be a rare and unexpected task to add to a property manager’s to-do list. However, as this article proves, it does happen! Tenant concerns about bats need to be addressed immediately. The issue will only continue to grow, along with the size of the bat colony. Failing to act can lead to many consequences, including:

A Guide for Both Tenants & Property Managers

We often get calls from tenants who have a bat issue, and quite often, their property manager or landlord is downplaying the seriousness of the situation. Unfortunately, we’re unable to do anything without management consent. However, we advise tenants that it is usually an issue of a lack of education about bats and the risks they pose. One of our blog posts lists the most common reasons why property management/landlords won’t fix a bat problem and how you might be able to approach it. Check it out here: https://www.getbatsout.com/what-if-your-landlord-will-not-fix-a-bat-problem/.

The best course of action for property managers is to call in a professional bat removal company at the first report of a bat. In-house maintenance teams are fantastic and can often deal with general pest control issues, but bats are not your everyday pest control problem. It takes a unique skill set and awareness of bat habits to successfully deal with this type of issue. Not only this, but the matter will be dealt with correctly the first time, eliminating possible legal or health liability issues down the track. Don’t let this situation in Texas become a reality at your apartment complex!

Do you have more questions about commercial bat removal or want to schedule an inspection? Contact us today on 877-264-2287 or via email info@getbatsout.com