Bats In My Barn 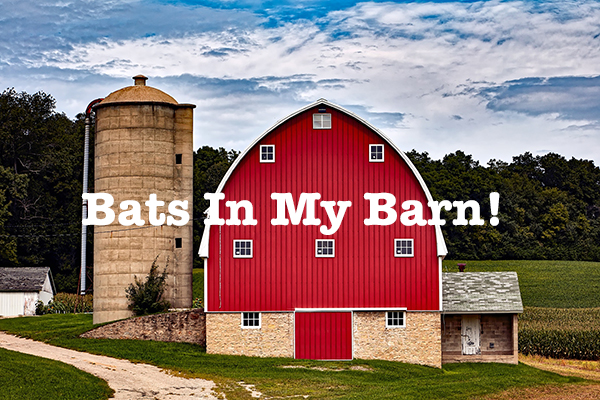 Bats In My Barn

Recently, news stations reported that a rabid bat had been found dead in a barn in Cedarville, Stephenson County, northwest of Chicago. Bats use farm buildings for nesting and roosting; they take advantage of bat-friendly features such as eaves, ledges, and beams.

CAN BATS DAMAGE A BARN?

For starters, bat guano and urine that has accumulated can attract roaches and mites, and the bad odor can be quite powerful and can leave a lasting smell that’s hard to remove. But that’s not all, bats defecate up to 30 times a day, and a buildup of bat poop can even cause the structural collapse of beams and ceilings.

COULD IT AFFECT YOUR HEALTH?

Bat guano, if disturbed, can release infectious spores resulting in Histoplasmosis. Histoplasmosis is an infection caused by a fungus called Histoplasma. Symptoms include fever, cough, and fatigue. Many people who get histoplasmosis will get better on their own without medication, but some people, such as those who have weakened immune systems, can become severe.

WHAT IF YOU KEEP LIVESTOCK IN YOUR BARN?

Rabies is a virus that can be transmitted, through saliva, from an infected mammal like a bat to other mammals, including livestock, wildlife, pets, and humans.

Livestock can get rabies if a rabid animal bites them or gets saliva from an infected animal, dead or alive, in an open cut, sore or wound, in its eyes, mouth, or nose. Did you know, even a frozen carcass can contain live rabies virus!

If an animal gets infected, it can transmit the rabies virus to others as soon as it gets into its saliva. It can take up to 2 weeks before the animal starts to show signs of rabies. When it does, symptoms include swallowing problems and excessive drooling, general sickness, slow and unusual movement, no apparent fear of humans, and aggression.

Rabies can’t be treated in livestock. Once signs of rabies appear, the animal will die.

What can you do?
If you have multiple bats in your barn you could have a maternity colony which, depending on the species of bat, can number between 5 and 500. If you think you have a bat colony living inside your barn, it’s best to call the professionals. Bat Remediation specialists will be able to pinpoint the places where bats are likely getting in, then remove them and seal vulnerable entry points to keep them from coming back. We can help you fix this issue once and for all. Call our customer service to set up an inspection at 877-264-2287.