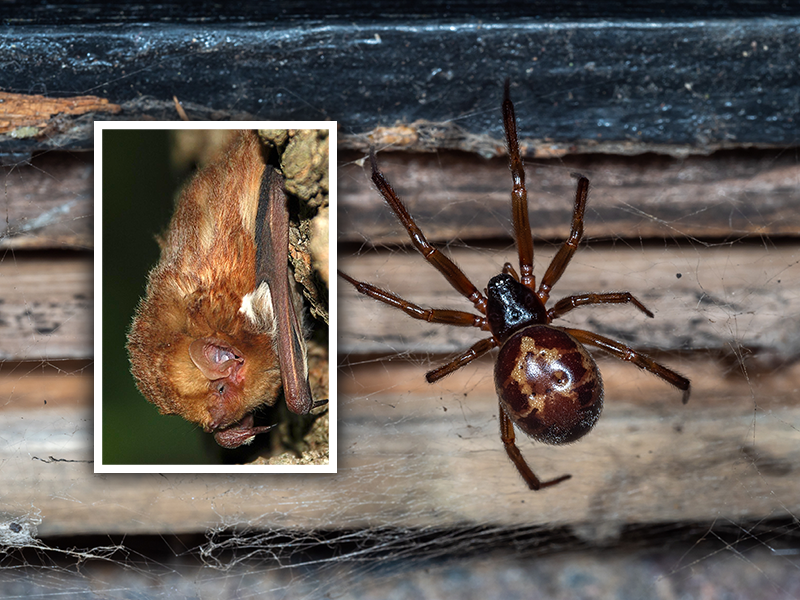 A spider eating a bat? Yes, this may sound crazy, but it has happened!

Scientists have recorded a noble false widow spider preying on bats for the first time.

The discovery was made in Shropshire, England, by wildlife artist Ben Waddams, who spotted this unusual occurrence at his home. He had been keeping an eye on the colony of bats that had made a roost in his attic. Then, two days running, he found a bat caught in the spider’s web.

He said: “I started checking every morning every evening, just to check what was going on, and then one morning I found a dead pup in this false widow spider’s web. It had been partially wrapped in silk, and it was shrunken up, so it appeared that it had been preyed upon.”

This is the first time any of this spider family “Theridiidae” has been known to hunt a bat, anywhere in the world!

The journey of the Noble False Widow

The Noble False Widow is thought to have first arrived in the UK in the 1870s. On one voyage between Madeira and England, this undetected stowaway, nestled comfortably amongst the bananas or possibly spinning its web from an ornamental plant, made its way across the Atlantic. Its quest for adventure continued, and today this spider is found across Europe and in all US states!

The Noble Black Widow usually measures only around 0.3 – 0.4 inches in length, but its potent venom can successfully prey on animals much larger than itself. This includes snakes, lizards, and now the Pipistrelle Bat – as found in Ben Waddams’ attic!

Bats in your attic?

Housing a bat colony in the UK does not pose as big a danger as in the US. Since 1986, out of over 15,000 bats tested for rabies in the UK, only 35 were infected. So officially, the UK has a rabies-free status, with only one recorded case of a person catching rabies from a bat in the UK.

Contrast that with the US, where bats make up a third of the 5000 rabid animals reported annually. Sadly, 1 to 3 cases of rabies in humans are reported each year in the USA and between 30,000 – 60,000 people need rabies post-exposure treatment. If post-exposure treatment is not given, this disease is fatal, so we need to stay alert to the danger of coming into contact with bats.

If you suspect you may have a bat colony in your residential or commercial property, there is a severe risk to your health and your property. You need to call a bat removal company for assistance without delay.

Please see the links below for more information. We are here to help!