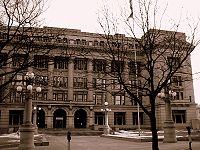 By Michael Koski Posted January 29, 2015 In Getting to Know GBO

I’ve been highlighting Get Bat’s Out technicians that I work with around the country as part of an ongoing series. This week, I took a moment to speak with Tom Lorsung in Douglas County, Nebraska about his work in bat removal.
Here’s what he had to say:

Tom, where do you live?

I’m in Douglas County near Lincoln, Nebraska and Council Bluffs, Iowa. Incidentally, Douglas County is the most populated county in the state with more than 530,000 residents. And, my job keeps me moving.

I’ve never done more than one job in the same city. I’d estimate that I’ve answered an average of 69 bat removal calls over the last three years.

What species of bat do you normally encounter?

Usually, I see Little Brown Bats. They are the most common out here.

Tell us about your most difficult project.

I’d have to say one I did in Columbus, Nebraska.

It was a converted, older, multi-level home. The siding had been poorly installed. It was long, tedious work, but the customer was happy when those bats were finally gone for good!

Thanks so much to Tom Lorsung for keeping Nebraska homeowners bat free! Keep up the great work!