Bat Habitat: Why Are Bats Living in My Home? 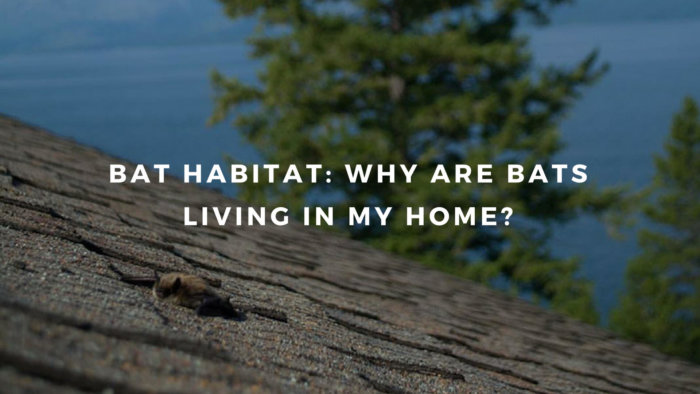 Bat Habitat: Why Are Bats Living in My Home?

By Michael Koski Posted May 05, 2018 In Bat Conservation , Bat Removal

If you look online for information about bats, almost all of it will talk about bat habitat as being in caves and trees. Which may make you curious why bats have decided to call your house their home.

The link between deforestation and endangered species is not a new concept. With more and more species of bats entering the threatened or endangered species list, thanks in part to White-Nose Syndrome, it is more important than ever to understand why bats are choosing to live in our homes. And why killing them to get rid of bats is just not an option.

As a professional bat removal company, we are on the front line of bat control. We have seen more than our fair share of what bats can do to your home and the destruction they can cause.

The diminishing of natural bat habitats is bringing more and more bats into our spaces. The less forests, trees, caves, rocks, and crevices that bats have to live in as a natural bat habitat, means they have to find somewhere else to live. Their options are limited without moving away hundreds of miles. Which is why they end up in your home.

Bats want to stay in the same place they were born, it’s a very strong natural instinct for them. They are also opportunistic. Which means they don’t chew, gnaw, or “carve out” a home, but rather exploit existing openings, which your home is full of.

Ignoring the fact that bats have moved into your attic is not a wise decision. We get the whole, “live and let live”, mentality, but having bats is your home is not healthy or safe for you and your family.

It’s also not wise to kill the bats living in your home. Bats are a huge source of flying insect control. Do you like being covered in mosquito bites all summer long? Neither do I. Those bats living in your home are keeping the mosquitoes in the area down for you. Can you imagine the rapid spread of disease by mosquitoes if bats were suddenly removed from the environment? Read about them being a keystone species here.

However, bats carry rabies. It’s a small percentage of bats, but rabies is 100% fatal. It’s just not worth taking that risk.

Bat guano in piles also carries a fungus called Histoplasma capsulatum. This fungus causes histoplasmosis in humans. Histoplasmosis is an illness that can be very mild flu like symptoms but can cause all sorts of complications up to the loss of an eye or lung and beyond.

when bat habitat has become your home

Bat habitat has changed drastically over the last 50 years or so. They are living in your home because there is simply less places for them to live in the wild.

If you are struggling with a bat infestation, please don’t wait to contact us. We are professional bat removal experts. Bat problems do not just “go away” and will continue to get worse.

We’re available anytime to help and offer rapid response if needed. Call today or fill out the form below and we’ll call you.