Bat Conservation International and Why We Support Them 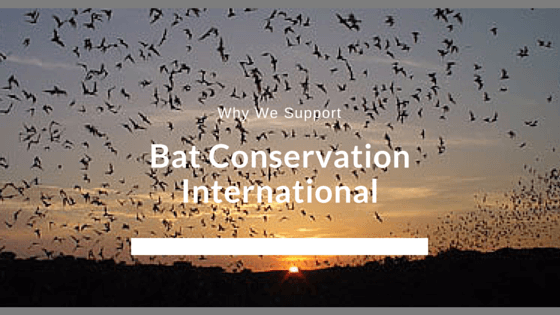 Bat Conservation International and Why We Support Them

Bat Conservation International is a great organization! We donate monthly to this very worthy cause and have for the past few years. As a bat removal company you may ask, “why?” though. Here are the top three reasons we think it’s important to support them.

1 – Bats Are Important to the Environment

It is estimated that bats contribute billions of dollars to insect pest control for the farmers of our country. (You don’t need to check your eyesight, you read that right. $BILLIONS$)

Sorry for touching on the monetary issue first but in a shaky economy this is a huge factor to consider. Think about your monthly grocery bill. I have myself, my wife, and four children to feed. I can tell you here and now that my grocery bill is a healthy part of my monthly household budget.

Now consider if the farmers of our country had to invest more money into insect pest control to produce our nation’s crops. My grocery bill would go up quite a bit, as would yours. That’s not even to mention that our fresh fruits and vegetables would be subjected to many more pesticides to actually get them to our tables.

Bats also keep you a little bit safer. Bats may get a bad rap for spreading disease, however, their main diet consists of mosquitoes among other flying nuisances. We are much more susceptible to the diseases carried by mosquitoes and they also carry many more than bats do.

West Nile Virus has killed many more people in the United States than rabies from bats. According to the CDC about 2.5 million people, or approximately 40% of the world’s population, are at risk of death or serious illness from a mosquito borne viral disease….

The bats of Bracken Cave in San Antonio, Texas is one of our favorite subjects here at Get Bats Out. It is a sight that we think everyone should put on their bucket list.

If you’ve never heard of this before, here’s the short version

The destruction of such an amazing world wonder would have been a tragedy for us all.

Merlin Tuttle, the founder of Bat Conservation International, also worked personally to save the bat population of the Congress Avenue Bridge in Austin, Texas. It is now home to the largest urban bat colony at an estimated 1.5 million bats strong.

We take great pride in the fact that we use 100% humane methods to remove bats from people’s homes or businesses.

One of my favorite things is watching people’s faces when I tell them what I do. This is a pretty typical conversation:

Them: What is it you do?

Me: We do bat removal from homes and businesses.

Me: …. 🙂 Why would someone need a baseball bat removed from their house?

There are a little over 1,300 species of bats in the world. We have species native to and only found in North America. Many of these bat species are being added to the threatened endangered species list due to white nose syndrome but also to recklessness from humans.

Yes, we realize our business is dependent upon bats not going extinct. We wouldn’t be very good at business if we didn’t acknowledge that. But the reason we support Bat Conservation International is for the environment.

Bat Conservation International has done much for bats and lobbied getting them listed on the threatened endangered species list. This is why we support them. For all of us, for our children and future generations, and for our environment.

If you would like to get involved in this very worthy cause, simply click here to donate to Bat Conservation International now.