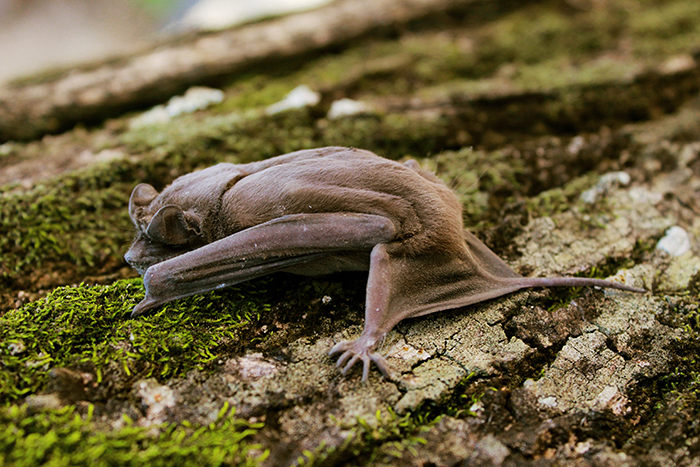 At this time of year, between May – July (depending on the region), female bats give birth to their babies. These baby bats will join the bat population, which makes up an estimated 20% of all mammals worldwide!

What is a baby bat called?

A baby bat is called a pup. Does that sound familiar to you? Likely you’ve heard baby dogs or baby seals referred to as pups. Many other animals such as guinea pigs, hedgehogs, sharks, and beavers also share this name for their young. Bats are mammals, so take the name pups as well.

Newborn bats are tiny – about 1-2 inches in length. Their weight varies from each species. They can weigh as little as 0.1 oz or less – that’s about the weight of ½ a teaspoon of sugar! However, the pup can be a lot heavier and even weigh up to ⅓ of the mother’s weight! Baby bats are born blind but usually open their eyes within 1-2 weeks. They are also born without fur but instead have very fine hair and are pinkish in color.

How can you tell if it’s a baby bat?

If the bat is very small and without fur, it is a baby. Babies are usually born between the end of May-early July. It is rare to see a baby bat as in the first few weeks after they are born, the baby bats stay in the roost, feeding off their mother’s milk, as they are not yet strong enough to fly and catch food for themselves. From August, at around 5 weeks of age, the young bats start to learn to fly and catch insects themselves, so there will be a greater chance of spotting the baby bats once they get to this more active stage.

What noises does a baby bat make?

Baby bat sounds are very high-pitched and may sound a bit like a bird tweeting and squeaking to a human ear. These squeaks help the mother bat to locate their baby.

Interestingly, animal behavior researchers from the Museum of Natural History in Berlin have studied the high-pitched noises that a baby bat makes, comparing them to the babbling of human toddlers. In their investigations, they found that although very different in sound, there were many similar features, such as the way both babies and bat pups repeat sounds. For instance, just as human babies will repeat a sound such as “dadadada,” bat pups make 25 different sounds and will repeat the same sound over and over again for a long time, almost as if they are practicing that sound. When they are fully grown, they use these same sounds to sing more complicated “songs,” which they can use to attract a mate or to protect their infants and territory. Just as for babies babbling is part of speech development, it is thought the bat pups’ early babbling also plays a crucial role in baby bats developing their communication ability.

Baby Bats are also known to cry when orphaned or separated from their mother. A baby bat will die without its mother, so this cry of distress can be a real life-saver for the baby bat.

Do pups attach to their mothers when they leave the roost?

Usually, bat pups are left in the roost by their mothers while they go to feed on insects at night. In fact, in some colonies, when the mothers leave, other female bats will rally around to look after the pups that are left – an instinctive babysitting service! When the mother returns she can locate her pup from among possibly hundreds of other bats in the colony, by listening for its squeaks, by its smell, and possibly by using a clever technique called echolocation – skillfully sending out sound waves that bounce back from objects, giving the bat information about the size and distance of the object, or in this case, telling her how far away her pup is.

However, not all bat mothers leave their pups behind. Over the years, our Get Bats Out technicians have spotted some rare behavior in bats. Once or twice they have observed mothers flying out of a roost with pups hanging onto them upside down. This unusual behavior has also caught the attention of ecologists who have concluded that these upside-down journeys help the pups get their bearings and learn how to navigate for themselves, preparing them for the time when they can fly solo. A little like going to a new country for the first time, you may ask a local to show you around, and at first, you may return a few times to those places, then when you’re a little more confident, you strike out and explore new places. Studies have shown that pups similarly learn where to go from those nocturnal, upside-down trips then when strong enough to fly alone, they start by going to the places their mother has taken them and then later go on to explore new areas.

Bat pups are born with huge back legs that, for some species, are even the same size as their mothers. They use their legs and teeth to grip onto the mother bat so that they do not fall to their death during these night-time flights.

Can you pick up a baby bat?

You should never pick up any bat, even a baby bat, with your bare hands. If you need to handle a bat, cover up and wear thick leather gloves to prevent the spread of disease through contact with the bat’s saliva or any bites or scratches. To capture a baby bat, it is better to use a container rather than to attempt to catch it in your hands.

Bats play an essential role in our ecosystem. They contribute to the pollination of plants, their guano is an effective fertilizer, and by their feeding habits, they greatly help control the number of insects – it’s estimated that just one bat can consume between 6000-8000 insects in just one night! So we highly value the presence of these mammals, but that being said we do need to respect that bats, including baby bats, are at risk of carrying rabies. We should also be aware that bat guano (droppings), if left to accumulate, can contain histoplasmosis, an airborne fungus that spreads when the guano is moved. This fungus can cause mild to very severe illnesses in humans. So, while we would not wish to be without bats for the sake of our ecosystem, it is crucial to be aware of these risks, avoid contact with bats of any age, and keep them outside our properties.

Do baby bats have rabies?

Not all baby bats carry rabies, and the percentage of sick bats is low, but as with all bats of any age, it is possible that they could be carrying rabies. There are some telltale signs that a bat is sick such as a bat being on the ground, flying around during the day, or struggling to fly. It is important however to keep in mind that symptoms develop at a late stage of the disease, and therefore, you cannot tell for sure whether a bat has rabies simply by looking at it. The bat needs to be sent to a lab for testing for rabies to be confirmed or not.

What do you do if you find a baby bat?

If you find a baby bat outside, first take some time to wait and see if its mother or the bat roost is nearby. It’s unusual to find a pup outside the roost unless it has fallen off its mother in flight.

If you observe a roost nearby, it is best to see if the mother comes to find her pup. If the pup is on the ground, it will be difficult for the mother to rescue her baby since most bats don’t take off flying from the ground but need to take off from a high point. If you feel comfortable doing so, you could place the pup on a nearby tree if it can grip the bark. Place the bat a few feet off the ground, and wait a couple of hours to see if the mother returns to get her pup. Do this after sunset but don’t wait any longer than 2 hours as the pup will get too cold. Remember never to touch the bat with your bare hands. Cover up well and wear thick leather gloves.

If you find a baby bat separated from its mother, this little pup needs help, or it will die.

We recommend contacting a licensed wildlife rehabilitator if the pup is on its own and there doesn’t seem to be a roost nearby or if the mother has not reclaimed her pup. Do not try to adopt/rehabilitate the pup yourself. Licensed professionals will know how to properly care for the pup so it can survive, and they will have received pre-exposure rabies shots for protection. You could alternatively contact your local veterinary center or animal control.

If you found the baby bat inside your property, we recommend you contain the bat before calling a wildlife rehabilitation service. As before, ensure you are well covered before approaching the bat, and carefully place it in a lidded container. Remember to check the box for holes as a baby bat can squeeze through a tiny space, even a hole just ¼ inch wide.

Remember that mother bats roost together, often in a building, before giving birth and for some time afterward while they are weaning their young. Therefore, finding a baby bat in your home usually means a maternity colony of bats roosting in your attic or roof. These maternity colonies or “bat nurseries ” can range from 20 to 300 bats. While it might sound sweet to house a bat nursery, this can cause unimaginable damage to your property and poses a big health risk to yourself and your family. So if you suspect you have a bat colony in your home, it’s best to contact your local bat removal specialist for professional advice.